The purchase of a permit is an investment in nature, as Metsähallitus uses the proceeds from the permits for the management of fisheries.

The sale of crayfishing permits for a given crayfishing destination depends on the size of the crayfish population and the pot quota. A pot quota for a single crayfisher varies from site to site. A crayfisher-specific pot restriction is used in an effort to ensure crayfishing opportunities for as many subsistence fishers as possible. There is also a quota for the total number of pots to be used under permits sold for sites.

You can pay permits using the most common payment methods in the online store (verkkokauppa.eraluvat.fi).

Metsähallitus crayfishing permits may be purchased from the Eräluvat phone service. The service is open on weekdays from 9 AM to 3 PM.

Learn more about Metsähallitus crayfishing waters (in Finnish) or call the service number for further information.

Preventing the spread of the disease is simple:

In some cases, there is a need to move trapping and fishing tackle from one water area to another. Moving tackle is only safe when the traps have been properly cleaned and disinfected in two steps:

Crayfish deaths often indicate the presence of crayfish plague. Report any suspected cases to the Eräluvat service number at +358 (0)20 692 424

Crayfish dies so quickly of crayfish plague that there is not enough time for easily identifiable external signs to develop. Suspected cases of crayfish plague usually do not raise any suspicions until dead crayfish are found or when catch numbers plummet.

The signal crayfish is responsible for spread of the plague. Dark spots found on the signal crayfish shell and in its joints are signs that the crayfish's defences are fighting the plague fungus It is assumed that nearly all signal crayfish are carriers of the disease. This is why there is no reason to send samples to the Finnish Food Authority for analysis unless the findings also involve mortality.

Where crayfish are concerned, deviations in their shell may indicate the presence of crayfish diseases. In such cases, you should send samples to the Finnish Food Authority. Shell deviations include clearly defined changes in colour and erosion.

Samples are to be sent to the Finnish Food Agency office in Kuopio:

Signal crayfish (täplärapu) usually have a well defined whitish or bluish patch at the base of the claw fingers. The claws of the noble crayfish (jokirapu) are the same colour as the shell.

How can small crayfish be identified if they have no claws? The noble crayfish has a row of clearly visible nodules on its side in the groove between the head and cephalothorax, while the signal crayfish shell is smooth throughout. 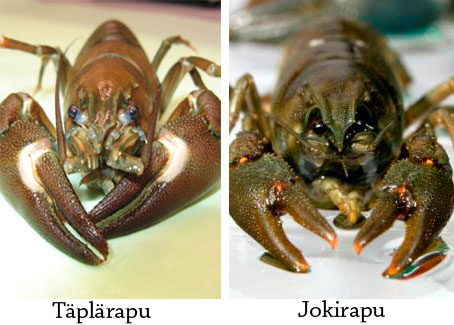